Sometimes I get feedback from friends who see my blog, and I often realize that some things are not available in other countries. I write this blog from a viewpoint of a Japanese, but if I were a foreigner, I would see things differently and easily find such rare things in Japan. It's easy to take pics of things in Japan because I live in Japan, but the downside is I don't know what seems interesting to foreign people. One thing one of my friends was curious about was this "Weider in Jelly", which is available mainly in Japan. 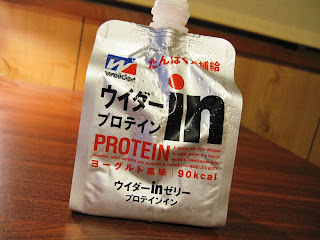 This jelly could be called a supplementary meal. There are several kinds of "Weider in Jelly" like "Energy", "Multivitamin", "Royal jelly", and etc., but since I like playing tennis so much, I often choose this "protein" type. You might feel hungry if you have only sandwiches for lunch, but if you have this as well you'd feel full. 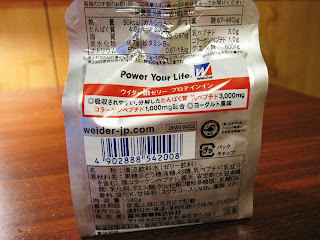 According to my research, an adult man needs 70g of protein a day. But this bag contains only 4.0g of protein, so you'd need to have something additional like meat, or beans to have enough protein. 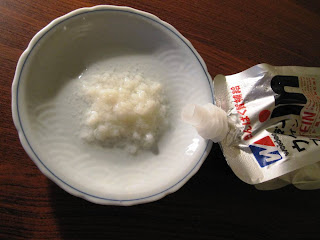 You might be curious about what the content is like, but what you can see is something like crushed yogurt, and it does taste like yogurt. You don't have to "eat" this, but you can drink it like having juice.
And what should be noted is this jelly is advertised by an actor called "Tomohisa Yamashita", who is a member of an idol group NEWS. He is handsome, but is also known as a very muscular guy. No wonder he heeds this protein jelly.
The video below is a commercial in which Tomohisa is pitching this protein jelly. He is apparently doing weight lifting longer than his superior to prioritize the exercise over a BBQ dinner. As you can see, he's insinuating "With Weider protein jelly, you don't need to have meat". The red Japanese words in the last part of the video say, "A 10 seconds meal that builds your body".

presto
This blog was made to introduce Japan to people all over the world.